Snow Paddling, or Why I Dusted Off My Carving Board 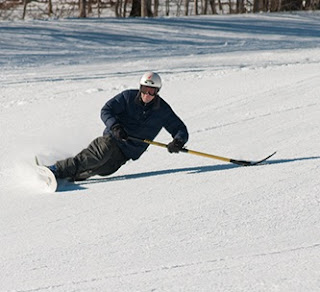 Back in the early '90s, when snowboarding was really breaking through to the mainstream, there were two types of riders. There were carvers with hard boot set-ups and plate bindings, and there was everyone else.

History has not been kind to the carvers.

I know because I am one of them, and I will espouse the virtues of the pure, single-track snowboard carve to anyone and everyone. Somewhere along the line, snowboarding as a sport left carving in the dust. At some point the only carving riders out there were the ones competing in slalom and giant slalom races. And now, 2012, I’m not even sure there is a snowboard racing circuit left anymore. You won’t find it in the XGames.

The carving board I purchased in 1992 was my go-to riding stick for about 12 years. I mostly searched out moderate pitches and groomed courdorouy and just laid turns out. If there was fresh snow (not too deep where the edge couldn’t find the bottom) it was a pinnacle experience.

I put my carving board away in recent years. And judging by what I see out on the hill, so has everyone else. You can’t find a hard-boot setup, unless, from what I understand, you are in Europe. I don't mind being the “it's really big in Europe” guy, but for whatever reason I stopped taking the carver out. 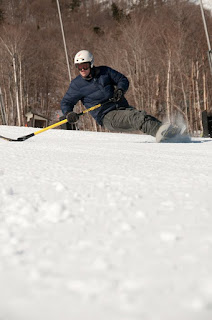 Then came the snow paddle. As a Stand Up Paddle boarder I'm attracted to anything where there's a board on your feet and a stick in your hands. Like other SUP people. That's why land paddles have come out, to give you the SUP feeling on a skateboard. So it was natural - as skateboarding and snowboarding are first cousins - to think about bringing paddles to the snow.

The thing about snowboarding is, it allows you to do what you can do on a surfboard, times infinity: dozens of turns at a time, enormous airs, busting off a wind lip over and over, reaching highway speeds ... it’s wave-riding unencumbered by the ephemeral nature of the wave.

With Stand Up Paddling, surfers now have a whole new bag of tricks, the most foundational of which is edging a board heavy for a bottom turn and pushing the paddle blade into the center of the turn for a second point of pressure to lean on. This is why you always see two wakes trailing a Stand Up Paddler shooting down the line on a wave: the wake of the board and the smaller wake of the paddle blade.

With the snow paddle, this SUP surfing move gets translated to the snow and is unleashed in the way only snowboarding can unleash -with more G-force, more speed and more lean. Being on snow as opposed to water gives you that solid second point of pressure that you can count on.

I knew the snow paddle and carving snowboard belonged together from the beginning (which was the fall of 2011), but I guess I didn't realize just how much. My plan for my first run on snow with a paddle in my hands was to just focus on the board and round my turn back into shape. But literally the first time I laid the board on edge and my upper body drew closer to the snow, There Was The Paddle, right where it needed to be. I couldn't do anything but lean on it. There was nothing I would rather have done but lean on it. 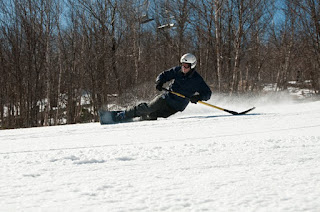 Sinking into the space between two pressure points

When you carve so hard that your hip's kissing the snow then pressure that second point of contact on the inside of your arc, getting your upper body highly involved, you end up suspended for that moment in the Space Between. It is enchanting. Take it from someone who has been on a carving board for years, the snow paddle takes the whole endeavor up a couple notches on the radical-body-angle meter.

And here's the thing. The slow and quiet death of American carving I really believe was an accident of snowboarding history, fueled mostly by marketability and spectator-friendliness in freestyle snowboarding and the lack of same when it comes to carving and racing.

With Stand Up Paddling gaining in popularity like a Western wildfire, I believe snowboarders are about to rediscover The Carve, prompted by the Snow Paddle. And with it in hand, it's going to be better than they ever remember it being.

For more on snow paddling, check out snowshift.com and kahunacreations.com. 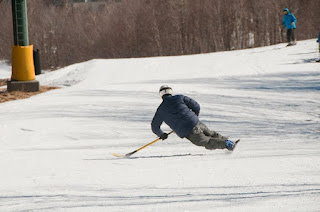 More from a spring day at Jay, VT 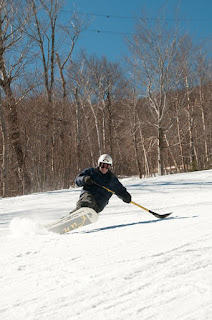 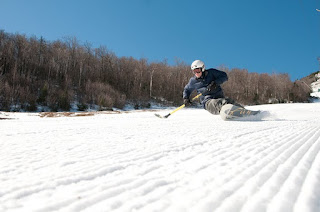